If you have been following my blog or social media updates, you know there is nothing that I enjoy more than sharing my knowledge about scriptwriting with others. That is why I was once again honored to be one of the 100+ world-renowned speakers at this year’s Story Expo, which took place September 11-13 in Los Angeles. The Expo brings together top speakers, writers, vendors and communicators in one forum to give screenplay writers the technical tools and motivation they need to excel at their chosen profession. 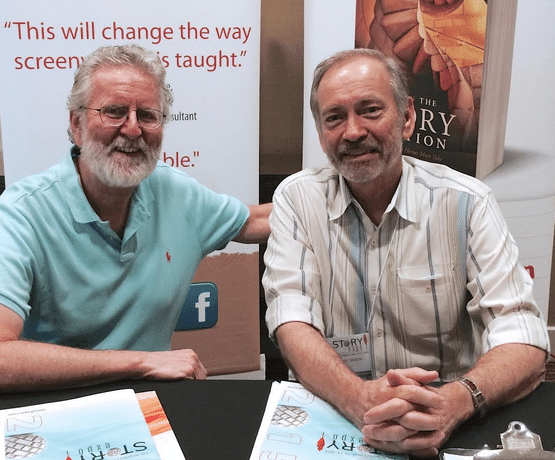 For those involved in any facet of writing a movie script, Story Expo is the one conference you must attend. It attracts professional writers from film studios, TV networks, production companies, universities, school districts and writers’ guilds, and grows yearly in popularity, prestige and importance. Attendance this year grew by 33% over 2014, which was already up 28% over 2013’s figures. Writers from over thirty U.S. states and eighteen countries attended, including The Netherlands, England, France, Russia, Germany, Canada, Brazil, Italy, South Africa, Ecuador, Nigeria, and Singapore. In fact, there was an entire class from the Writer’s Guild of South Africa, paid for by the South African government!

Derek Christopher, founder and chief driving force behind the Story Expo, has been the go-to guy for the top consultants in the screenwriting industry for over a decade. By organizing major events, seminars, and speaking engagements, Derek hopes to open the exciting world of screenplay writing to many more people.

As always, I had a great time speaking about creating great characters, character growth and how to build plots. It was great to get feedback from people who attended the presentations, to answer their questions about writing a screenplay, and to know that people came away with a better understanding of story structure and character growth. In case you did not attend, here are some of my impressions and takeaways from the great people I met and saw at this year’s event:

On the vendor side, Alejandro Seri was there as the Corporate Marketing Director for Final Draft, a professional screenwriting software. Alejandro is an award-winning, bilingual screenwriter, director and instructor at the UCLA Extension Writers’ Program. While a nineteen year old UCLA college student and screenplay writer he approached studio executive David Garcia with the idea of starting an alternative film school. With the help of ten additional students, they formed Cyberpix Film School in downtown Los Angeles.

Those interested in writing screenplays come back to this event year after year. In fact 96% of this year’s attendees said they will recommend Story Expo 2016 to a friend or associate. Plan now to attend Story Expo 2016, which will be held September 9-11, 2016 at the Westin LAX Hotel in Los Angeles. Take control of your stories by learning the craft, determining in which medium your stories are best told, studying the business of storytelling, identifying and using the tools and resources available to you, understanding how to package and pitch your ideas and scripts, and using social media and other techniques to start and maintain a successful writing career. You can also pitch your scripts and stories to top production companies, agents and managers in the Story Expo Pitching Room and network with peers from around the world.

About The Story Solution: Eric Edson’s The Story Solution provides screenwriting tips for those interested in writing screenplays. Acclaimed by many as one of the best screenwriting books, Edson outlines 23 actions used in screenplay writing to create three dimensional heroes. Visit the website at http://www.TheStorySolution.com to listen to audio clips about creating characters. “Like” the Facebook page to receive tips on scriptwriting. Call 818-677-3192 for more information about writing a movie script.

Writing With Surprise and Suspense
December 19, 2018